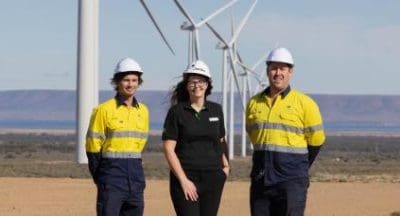 National supermarket group Woolworths’ operations in South Australia will be powered by 100% renewable electricity from July – the first state to go completely green in the company’s 2025 transition target.

Under a new energy partnership, Woolworths will source renewable electricity from South Australia from Iberdrola Australia’s wind turbines and solar array at the new Port Augusta Renewable Energy Park. Iberdrola is the largest wind-solar hybrid park in the southern hemisphere where 50 wind turbines and 250,000 solar panels will work in tandem to provide 100,000 megawatt hours of renewable electricity per year on behalf of the retailer.

After the milestone in South Australia in July, Woolworths said it will continue to gradually replace traditional energy contracts in other states with green deals as it transitions to renewables nationwide by 2025.

As Australia’s largest retailer, accounting for approximately 1% of the country’s total energy consumption, Woolworths Group’s transition to renewable electricity by 2025 has represented a significant influx of green power to the grid national level and considerable investment in the sector over the next three years.

Woolworths Group said that since 2015 it has reduced its carbon emissions by more than 27% through continued investment in energy efficiency, including the transition to LED lighting in more than 1,000 supermarkets, and continued the deployment of its own network of solar panels on the roofs. stores and distribution centers – now with more than 99,000 panels across 171 locations.

The Woolworths Group has pledged not only to be net carbon neutral by 2050, but to make its operations carbon positive by 2050 – if not sooner – meaning it will remove more carbon from the atmosphere than it produces.

The move follows the recent introduction of compostable fruit and vegetable bags to Woolworths South Australian supermarkets last month, eliminating up to 70 tonnes of plastic from landfills each year as the retailer strives to become more green.

South Australian Prime Minister Peter Malinauskas said his state has long been a global leader in renewable energy, paving the way for more businesses to switch to clean energy.

“This is how the world evolves. Private capital is now leading the charge in supporting clean energy, which presents a big opportunity for jobs in South Australia,” he said.

Woolworths Group CEO Brad Banducci said South Australia will be the first state where every Woolworths site is powered by green energy, from Roxby Downs to Renmark.

“South Australia has helped lead the transition to renewable energy in Australia, combining solar, wind and batteries to enable us to take this leap forward in our mission to be fully powered by renewable sources. renewables by 2025,” he said.

“Our customers want us to buy better for the planet, and renewable energy is one of the main ways we are driving sustainability with the support of our sustainable innovation company Woolworths360.

“We look forward to expanding this to other states over the next three years.”

In its transition to renewable energy, Woolworths said it prioritizes partnerships that build on new renewable energy projects to help accelerate industry growth and improve availability and affordability. green energy for other businesses and the community.

South Australia has been the site of a series of retail sustainability breakthroughs in recent years. It was the first state to ban single-use plastic bags and picnic utensils, and the first state in which Woolworths replaced plastic fruit and vegetable bags with a compostable alternative in response to high rates of access to composting.