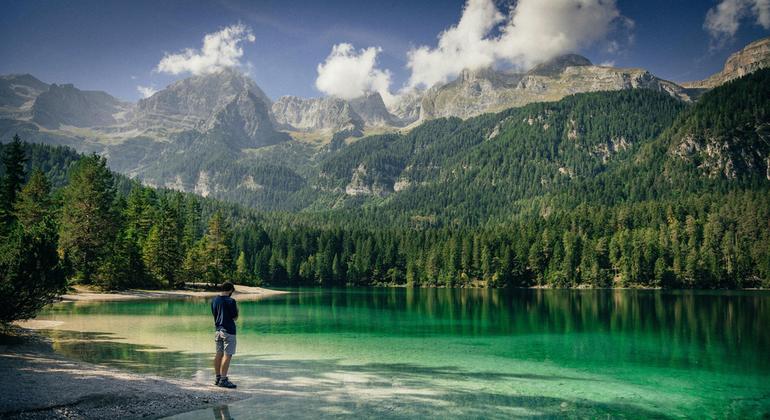 Costa Rica, the Maldives, Morocco, Slovenia and Switzerland presented the draft text to the 193-member Assembly, the most representative body of the UN, last June, following the adoption by a historic resolution of a similar text adopted in October 2021 by the UN Human Rights Council. .

The resolution recognizes the right to a clean, healthy and sustainable environment as a human right essential to the full enjoyment of all human rights and, among other things, calls on States and international organizations to adopt policies and intensify their efforts to ensure a clean, healthy and sustainable environment for all.

But why is it important that all UN members recognize this right? And what will the adoption of this resolution mean for the people of the world? UN News spoke to the UN Special Rapporteur on human rights and the environment, Mr. David Boyd, and asked him about these and other issues.

One of the biggest threats to our oceans is human-made pollution.

So, what action will be taken by the General Assembly?

David Boyd: There will probably be a vote on the recognition of the right to a clean, healthy and sustainable environment. This right which was not included in the Universal Declaration of Human Rights in 1948. So it is truly a historic resolution which will change the very nature of international human rights law.

Why is it important that countries vote “yes” on this resolution?

It matters because in the face of the triple environmental crisis we face – rapid climate change, loss of biodiversity and pervasive toxic pollution that kills 9 million people every year – we need transformative changes in society, we need to move quickly to renewable energy.

We also need to move to a circular economy, and we need to detoxify society, and the right to a healthy environment is one of the most powerful tools we have to hold governments to account.

David Boyd, Special Rapporteur on human rights and the environment.

General Assembly resolutions are non-binding, which means that countries have no legal obligation to comply with them, so how could they be held accountable?

We have a record we can look at when in 2010 the General Assembly adopted the resolution recognizing for the first time that everyone has the right to water and sanitation.

This resolution was also not legally binding or enforceable, but it was a catalyst for a cascade of positive change that improved the lives of millions.

This is because countries have responded to this resolution by changing their constitutions, their highest and strictest laws. Thus, Costa Rica, Fiji, Mexico, Slovenia, Tunisia and others have done so. And above all, States have really made it a priority to fulfill their obligations to provide populations with safe drinking water. So, [ for example]In Mexico, the government has not only recognized this right in its Constitution, but has worked with rural communities to provide clean water to more than 1,000 rural communities over the past decade.

Canada has also worked with Indigenous communities to improve water supply and sanitation infrastructure in more than 130 communities over the past decade.

So these resolutions may seem abstract, but they are a catalyst for action and they empower ordinary people to hold their governments to account in a very powerful way.

The Amazon rainforest in Brazil.

The Human Rights Council adopted the right to a healthy environment last year, have you seen any changes at the national level since then?

I think there have been positive developments. Of course, we are talking more than ever about the right to a healthy environment.

There are countries that are starting to incorporate it into their legal systems and there are tons of grassroots people who are using this law to argue that their government should take stronger climate action, clean up their water quality air and take better care of biodiversity and ecosystems.

It’s not an overnight effect, but we are already starting to see some early dividends.

What is your appeal to the countries before the vote?

Ideally, all the countries of the world would co-sponsor this resolution and then vote in favor of it. It would show that all countries in the world understand how important a healthy environment is for the future of humanity.

Switching to renewable energy could prevent 4 to 7 million deaths from air pollution each year worldwide.

Would a country vote “no”? Are there any challenges to implementing this resolution?

Countries have different challenges. So there are countries that have a very conservative view of human rights.

There are other countries that are major oil and gas producers who may fear the implications of recognizing this right – so it could be some of the nations wondering if they will be able to support this resolution.

Why should the right to a healthy environment be recognized as a universal human right?

The lives of so many people on this planet are affected by the climate crisis and environmental degradation. Today, literally billions of people breathe air so polluted that it will reduce their life expectancy by years.

People need to understand that biodiversity is really the foundation of life on this planet. Without the plants and trees that produce oxygen, we couldn’t breathe. Without the ecosystems that filter water, we would be in big trouble.

And the reality is that we need a safe and livable climate to thrive as human beings.

This is why this right is so important. Governments have promised to clean up the environment and address the climate emergency for decades, but hHaving the right to a healthy environment changes people’s perspective from begging governments to act to demanding that governments act.

What will you do if the resolution passes?

Oh! I will jump up and down with excitement. I will be so happy and absolutely thrilled with how this will increase and improve the quality of life for people all over the planet.

A woman with an umbrella is walking in the rain in a field. On the left, a rainbow. Photo: WMO

A call within the UN

Other UN experts and special rapporteurs, the head of the United Nations Environment Program (UNEP), Inger Andersen, as well as the High Commissioner for Human Rights, Michele Bachelet, expressed their support recognition of the right to a healthy environment in recent months.

Last June, the conclusions of the Stockholm+50 conference also recommended that States “recognize and implement the right to a clean, healthy and sustainable environment”.

This action is also included as a priority for the UN Secretary-General, António Guterres, as indicated in Our common program and the Call to action for human rights.

United Nations special rapporteurs such as Mr. Boyd are assigned specific thematic or national mandates by the Geneva-based Human Rights Council, where they report on their fact-finding or monitoring missions, usually during the one of the forum’s three regular sessions per year. Expert posts in the Special Procedures Section of the Council are honorary and the incumbents are not remunerated for their work.

An unlikely green energy story: from waste to jet fuel