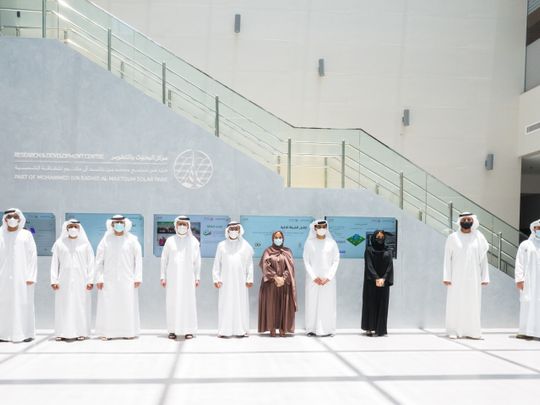 Al Nuaimi led a delegation from the Ministry of Climate Change and Environment (MOCCAE) which included Sultan Alwan, the Acting Undersecretary and other senior officials.

The two sides discussed strengthening bilateral cooperation to promote sustainability and innovation, as well as to accelerate the development of a sustainable green economy and strengthen the UAE’s pioneering capacity to deal with environmental and climate challenges. This is done by using clean and renewable energy technologies, particularly solar power, to balance economic growth with environmental sustainability for generations to come.

Waleed Salman, Executive Vice President of Business Support and Excellence at Dewa, and Abdul Rahim Sultan, Director General of the World Green Economy Organization (WGEO), as well as senior officials from WGEO and Dewa have also participated in the meeting.

Al Tayer and Al Nuaimi visited the R&D center, of which 70% of the researchers are Emiratis. The Centre’s research focuses on solar energy, the integration of smart grids, energy efficiency and water. It examines the applications of the Fourth Industrial Revolution, such as 3D printing and additive manufacturing. The R&D centre’s outdoor testing facilities include the Green Hydrogen Project, the first of its kind in the Middle East and North Africa to produce green hydrogen using solar power. The station has been designed to accommodate future applications and test platforms for different uses of hydrogen, such as for industry and transport.

The meeting included discussions on ways to increase cooperation and strategic collaboration between Dewa, WGEO and MOCCAE. Dewa builds strong integrated strategic partnerships with all local and federal agencies. This is in addition to the exchange of information, good practices and experiences due to the importance of improving sustainable growth and tackling climate change and development issues. The UAE will host MENA Climate Week 2022, which is the first event of its kind in the Middle East and North Africa, on March 2-3, 2022 during Expo 2020 Dubai. The event aims to encourage more momentum to tackle climate change in the Middle East and North Africa.

Dewa has made significant achievements using clean energy. The share of clean energy capacity in Dubai’s energy mix has increased to 9%. This exceeds the percentage set in Dubai’s Clean Energy Strategy 2050 to deliver 7% of Dubai’s total electricity capacity from clean energy sources by 2020. Al Tayer noted that these efforts have helped reduce its carbon emissions by 22% in 2019, two years before the target of reducing it by 16% by 2021 in the carbon reduction strategy.

Al Tayer said Dewa has a clear direction for the energy sector based on Dubai’s 2050 Clean Energy Strategy to deliver 75% of Dubai’s total electric capacity from clean energy sources. ‘by 2050. Dewa uses the latest applications and disruptive technologies of the Fourth Industrial Revolution. Dewa currently has promising solar projects at the Mohammed bin Rashid Al Maktoum Solar Park, the world’s largest single-site solar park with an expected capacity of 5,000 megawatts (MW) by 2030. Upon completion, the solar park will cut over 6.5 million tonnes of carbon emissions each year. Dewa is also building the 250 MW pumped storage hydroelectric power plant at Hatta, which will use existing water stored in the Hatta dam. Dewa has other projects underway to use wind power.

â€œTackling climate change by implementing strong mitigation and adaptation measures is a strategic priority for the UAE. At the center of our efforts is the diversification of energy sources and increasing the share of renewable energies in the energy mix with the ultimate goal of achieving carbon neutrality. To achieve these goals, MOCCAE is actively working with government and private sector stakeholders to mainstream climate action into future strategies and directions, â€said Al Nuaimi.