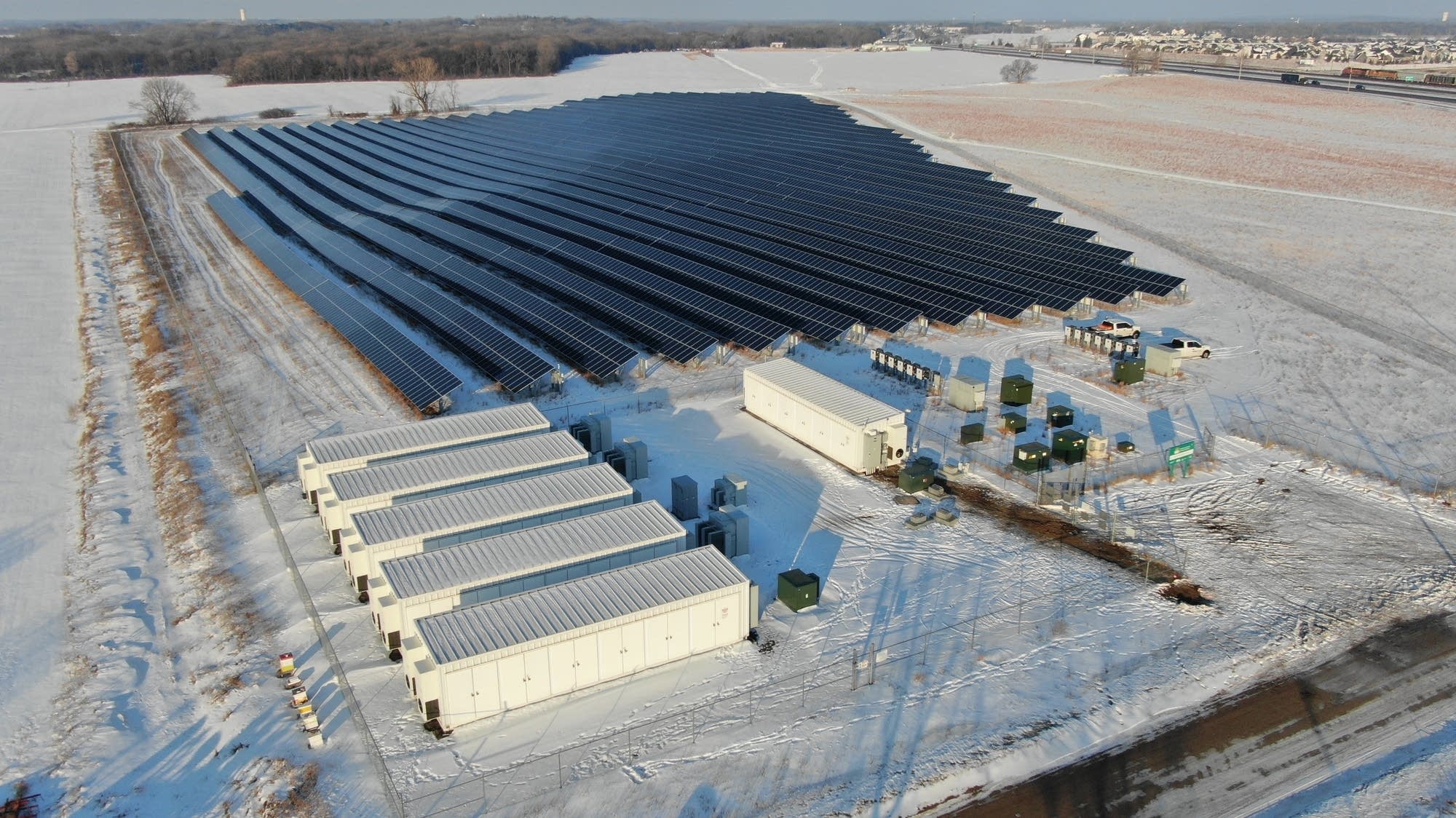 In a field in Ramsey north of the Twin Cities, a solar panel generates power from the sun.

What’s unusual about this network are the large white boxes connected to it that are the size of shipping containers. These are batteries that store energy when the sun is shining, to be used when the cost and demand for electricity are high.

Connexus Energy, the state’s largest electricity cooperative, built the Ramsey project and another in Athens Township three years ago. It was the first large-scale solar and battery storage project in Minnesota.

Greg Ridderbusch, CEO of Connexus Energy, said this is one of the reasons Connexus is able to keep electricity rates stable for the fifth consecutive year.

“It saves our members a lot of money every year by allowing them to shift energy use to very expensive time periods,” he said.

Connexus members are interested in greener electricity, but most don’t want to pay more for it, Ridderbusch said.

“Our solar panels that we install are cheaper than the cost of electricity that we buy off the grid,” he said. “So we’re doing the two things our members want.”

About a third of Minnesotans get their electricity from a rural electric cooperative.

While Minnesota’s largest investor-owned utilities, including Xcel Energy and Minnesota Power, are raising their electricity rates this year, some rural electric co-ops are keeping rates steady.

And although rural cooperatives have in the past relied heavily on electricity generated by fossil fuels, some are now embracing renewable energy, driven by the falling cost of wind and solar as well as demands from their members. environmentally conscious.

“We are moving towards a much greener and more sustainable grid, just like the rest of the energy industry, and in many ways we are leaders in this area,” said Minnesota CEO Darrick Moe. Rural Electric Association, which represents the state’s 50 rural electric cooperatives. “At the same time, we are keeping an eye on affordability.”

Rural electricity cooperatives were formed in the 1930s to bring electricity to rural areas, where 90% of farms and homes had none.

Farmers have united to buy generators, transmission lines and other equipment to connect their homes and farms to electricity, said Gabriel Chan, associate professor at the Humphrey School of Public Affairs at the University of Minnesota.

Unlike investor-owned utilities, rural electricity cooperatives are not-for-profit. They are owned by their members, who elect a board of directors.

What makes the cooperative model unique is that its owners are also its customers, who are directly affected by its decisions, Chan said.

“I think it created a real natural incentive to do things like install energy efficiency or demand response,” he said.

These efforts include installing smart meters that allow members to track their energy use or control water heaters to run at night when electricity demand is lower.

Connexus, for example, offers its members incentives to use less electricity during peak periods, such as hot summer days.

Connexus member Danika Peterson joined the program when she moved to Andover three years ago. She receives a text alert informing her that there is a rush hour ahead.

The next day, she logs into her Wi-Fi-connected thermostat from work and adjusts the air conditioning a few degrees higher. The next day, she receives an email from Connexus telling her how much money she has saved.

Peterson likes the program because it saves money on her electric bill — about $200 over the past three summers — and it’s up to her whether she wants to participate.

She said her family members had tried unplugging different appliances to see how much they could reduce their electricity usage.

“Sometimes it’s fun to see if we do this, how much will we save? said Peterson.

Wright-Hennepin Cooperative Electric built the state’s first community solar garden at its Rockford headquarters in 2013. It has since added more gardens, along with more options for members.

Bob Sandberg, Wright-Hennepin’s vice president of power supply and business development, said co-ops are able to move more quickly to develop new programs without having to get Board approval. state utilities, as do investor-owned utilities.

“You’re able to create it, and direct feedback comes directly from your own members — if they agree, they like it, participate,” Sandberg said.

Most rural cooperatives obtain the majority of their electricity from large wholesale cooperatives. These contracts usually limit the amount of power they are able to generate on their own.

Connexus is one of 28 member co-ops that owns Great River Energy, the state’s largest generation and transmission co-op.

Great River Energy allows rural cooperatives to produce up to 5% of their energy themselves, but Connexus would like to do more, Ridderbusch said.

Great River has a committee considering whether to raise that cap to 5%, spokeswoman Therese LaCanne said.

In the meantime, Great River is moving away from electricity generated from fossil fuels – including selling its Coal Creek Station power plant in North Dakota – and looking to more renewable energy sources, said David Ranallo, director of communications, culture and member services.

Ranallo said Great River is on track to reduce its carbon dioxide emissions by more than 80% by 2025.

“These sometimes difficult decisions to close factories or sell factories and reduce production have [put] we’re on track to achieve these carbon emissions reductions ahead of many other utilities, and we’re also back in spades with our rate forecasts,” Ranallo said.

But not all rural electric cooperatives have been able to avoid the price hikes. Many are facing higher wholesale electricity costs and supply chain issues related to COVID-19.

Lake Country Power in northeast Minnesota is raising electricity rates for the first time in six years. A typical member will pay an additional $10 to $16 per month.

Chief executive Mark Bakk said equipment costs on average a third more than before the pandemic.

Bakk said other rural electric co-ops are likely to feel similar inflationary and pandemic-related pressures, if they haven’t already.

In search of reform

Because rural electricity cooperatives are not regulated in the same way as large utilities, they have sometimes been criticized for not sufficiently involving members or being transparent about business decisions.

Duane Ninneman is executive director of the Montevideo-based nonprofit Clean Up the River Environment, which has lobbied for rural cooperative reforms. He said many members don’t even know they get their electricity from a co-op or have a say in how it is governed.

But increasingly, co-op members are going to demand a bigger say in where their power comes from and what they pay for it, Ninneman said.

“The world of power generation is changing rapidly and dramatically,” he said. “And co-ops need to keep up with both the technology, but also how it relates to the people they serve.”

And with the coming growth of electric vehicles, there is a “huge opportunity” for cooperatives to invest in providing electricity for these vehicles and ensuring that rural residents are not left behind, said Ninneman said.

“Co-ops cover 85% of Minnesota’s geography,” he said. “They should be the drivers in creating this infrastructure and selling the electricity that powers transportation in Minnesota.”

You make MPR News possible. Individual donations drive the clarity of our reporters’ coverage across the state, the stories that connect us, and the conversations that provide insight. Help ensure that MPR remains a resource that brings Minnesotans together.

Donate today. A donation of $17 makes a difference.

Top 3 Health, Comfort and Safety Benefits of a Walk-In Bathtub You Should Know About Today | Business