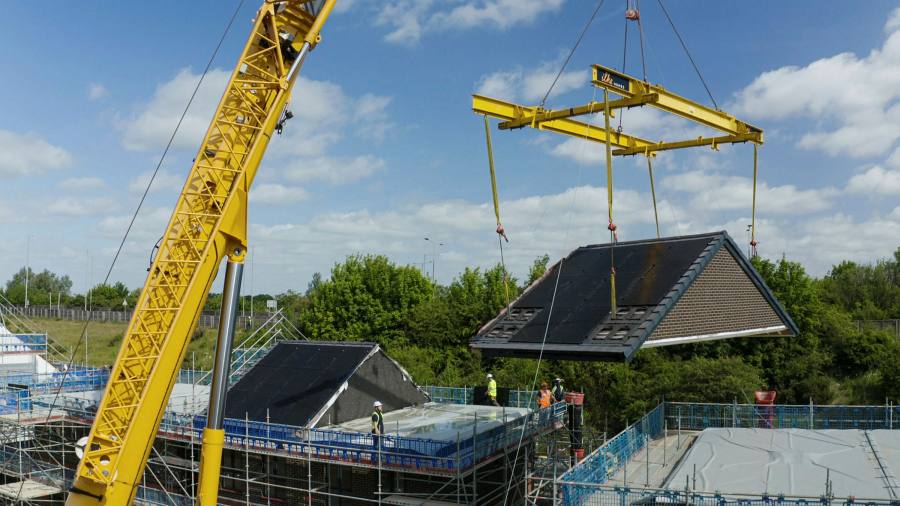 The joint project between Octopus and Ilke, which builds prefabricated homes in factories, is designed to wean the country off fossil fuels in what the companies say is a first for the UK market.

However, the initiative means buyers will have to pay between £8,000 and £9,000 extra when they buy their home, said Ilke chief executive Giles Carter. This is the cost of adding solar panels, storage batteries and air-source heat pumps to homes to make them energy self-sufficient.

The companies are piloting the project with a pair of two-bedroom semi-detached family homes in Essex. They plan to expand the program to more than 10,000 homes by 2030.

Octopus has pledged that homeowners won’t pay any bills unless they use more than 10 MWh of energy, which Jackson estimates is three times a standard household’s annual consumption. Any excess energy generated can be fed back into the grid.

“We think [the homes] could be self-sufficient forever. It’s a plan. Sooner or later you start to be able to transform an energy system when you do that,” Jackson said.

The partnership aims to demonstrate that “a sustainable future does not mean being cold and having to wear hemp. It’s about living in homes of as high a quality as you would expect elsewhere.”

If the solar panels aren’t producing enough power, homes are still connected to the grid and can draw power without it affecting their bills, Jackson added.

Octopus’ zero bill guarantee is made for a period of 12 months rather than perpetuity, although Jackson and Ilke’s Carter say they expect to apply the zero bill indefinitely.

As annual household energy bills rise and are expected to hit £2,800 later this year, Carter says homebuyers would quickly get their money back.

He expects the costs of building green technologies to decline over the decade. “By 2030, we hope there will be no additional costs,” he said.

The housing stock in the United Kingdom is one of the oldest and least well insulated in Europe.

The government has made it clear that decarbonising homes will be essential if the country is to reach its legally binding net zero target by 2050, but last year withdrew a flagship grant scheme to help homeowners make their properties more efficient. .

“The most powerful word in marketing is free. How to create a carbon transition? We create a proposition that consumers can engage with. If you can offer zero bills and save the planet, then you’re on the right track,” he said.

The City of New Orleans Accredited as a GBAC Star Destination