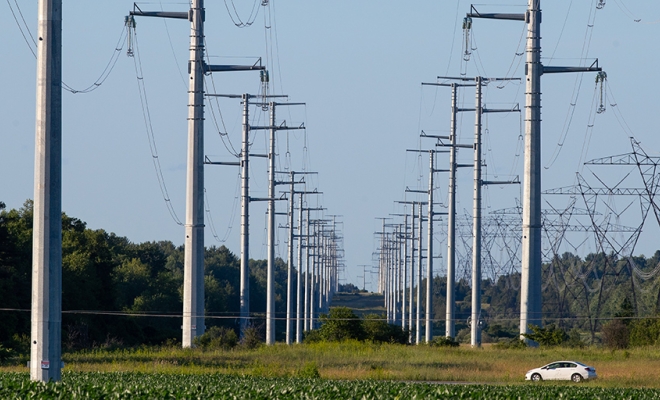 “By strengthening the backbone of our energy system, New York is helping ensure a clean energy future for our children and grandchildren,” Governor Hochul said. “Smart Path is a flagship project as part of a comprehensive build of our statewide transmission system that will provide clean energy to New Yorkers across the state, advance our climate goals and energize our economy by creating green jobs.”

“NYPA’s Smart Path transmission project in the North Country will bring more clean power to the state’s power grid, which will help meet our key national clean energy goals,” said Lieutenant Governor Antonio Delgado. “Clean energy is the smart way to power New York’s future and projects like this will help us provide a cleaner future for our children.”

NYPA and National Grid are collaborating on another North Country transmission project known as the Smart path connection which will run east-west from Clinton to Massena and north-south from Croghan to Marcy. When completed, the two segments of Smart Path Connect will join the Smart Path project, creating an upgraded continuous transmission line from Clinton to Marcy. The Smart Path Connect project is currently undergoing an environmental review with the New York Public Service Commission (PSC). Together, these transmission projects total nearly 1,000 miles of new and upgraded New York State transmission lines that will help advance New York’s goal of getting 70% of the state’s electricity. from renewable sources by 2030 and achieve a zero-emission energy grid by 2040.

NYPA Administrator Eugene L. Nicandri said: “The Smart Path project is a great example of the important work underway in the North Country that will strengthen our drivetrain system for the benefit of all New Yorkers. I commend all of the workers who have kept this project on track through the challenges of the pandemic, and I am extremely proud of NYPA’s leadership in developing this line and its continued stewardship of one-third of the state’s transmission system.”

NYPA Interim President and CEO Justin E. Driscoll said: “I am proud of the work the Power Authority has undertaken to help strengthen New York’s energy grid, including our pioneering work on the Smart Path project. Despite the challenges posed by the pandemic and supply chain issues , work on NYPA’s Smart Path Line remained on track and is now two-thirds complete. This critically important north-south transmission link makes our transmission system more reliable and efficient and I look forward to looking forward to the completion of the project next year.

The first phase of the Smart Path project involves rebuilding approximately 78 miles of the total 86-mile transmission artery that was originally built by the federal government in 1942. The second phase of the Smart Path project will be completed as part of Smart Path Connect which will upgrade an additional six miles of 230 kV transmission lines to 345 kV. The Smart Path line was the first asset acquired by the Power Authority in 1950. Stretching north to south through St. Lawrence and Lewis counties in the North Country, the newly rebuilt lines will connect economic power, clean and renewable to the state’s electrical system, including low-cost hydroelectricity NYPA’s St. Lawrence-Franklin D. Roosevelt Power Project as well as energy from newly built renewable energy sources such as wind and solar.

The construction of the Smart Path project involves the replacement of the original wooden H-frame poles, some of which are over 80 years old, with single steel monopoles in the existing right-of-way. The project created hundreds of jobs during construction.

The rebuilt lines will be able to transmit up to 345 kilovolts (kV). They will be operated in the short term at the 230 kV level until the completion of the Smart Path Connect project. This ability to increase voltage when demand requires it is a cost-effective way to add more renewable power, especially from in-state renewable power generation anywhere along the line. of transmission as New York continues to advance its clean energy goals.

New York State’s premier climate program is the nation’s most aggressive climate and clean energy initiative, calling for an orderly and just transition to clean energy that creates jobs and continues to drive a healthy economy. green as New York State recovers from the COVID-19 pandemic. Enshrined in law by the Climate Leadership and Community Protection Act, New York is on track to achieve its mandated goal of a zero-emission electricity sector by 2040, including 70% power generation renewable energy by 2030, and achieve economy-wide carbon neutrality. It builds on New York’s unprecedented investments to expand clean energy, including more than $35 billion in 120 large-scale renewable energy and transmission projects across the state, $6.8 billion in dollars to reduce emissions from buildings, $1.8 billion to expand solar power, more than $1 billion for clean transportation initiatives, and more than $1.6 billion in NY Green Bank commitments . Together, these investments support nearly 158,000 jobs in New York’s clean energy sector in 2020, 2,100% growth in the distributed solar sector since 2011, and a commitment to develop 9,000 megawatts of offshore wind power from ‘by 2035. Under the Climate Act, New York will build on that progress and reduce greenhouse gas emissions by 85 percent below 1990 levels by 2050, while ensuring ensuring that at least 35%, with a target of 40%, of the benefits of clean energy investments are directed to disadvantaged communities, and advancing progress towards the state 2025 energy efficiency target of reducing 185 trillion BTUs of on-site energy consumption in end-use energy savings.

NYPA is the nation’s largest state-owned power organization, operating 16 generating facilities and more than 1,400 circuit miles of transmission lines. More than 80% of the electricity generated by NYPA is clean, renewable hydroelectricity. NYPA owns and operates approximately one-third of New York’s high-voltage power lines. These lines transmit power from NYPA’s three major hydroelectric generating facilities and independent wind power generation facilities, connecting nearly 7,000 megawatts of renewable energy to the New York State power grid. This includes connecting to the grid more than 6,300 megawatts of hydroelectric power and approximately 700 megawatts, or more than one-third, of wind power generated by New York State. NYPA does not use state tax money or state credit. It finances its operations through the sale of bonds and income drawn largely from the sale of electricity. For more information, visit www.nypa.gov and follow us on Twitter, Facebook, instagram, tumblr and LinkedIn.

Inside clean energy: Some EVs now pay for themselves within a year