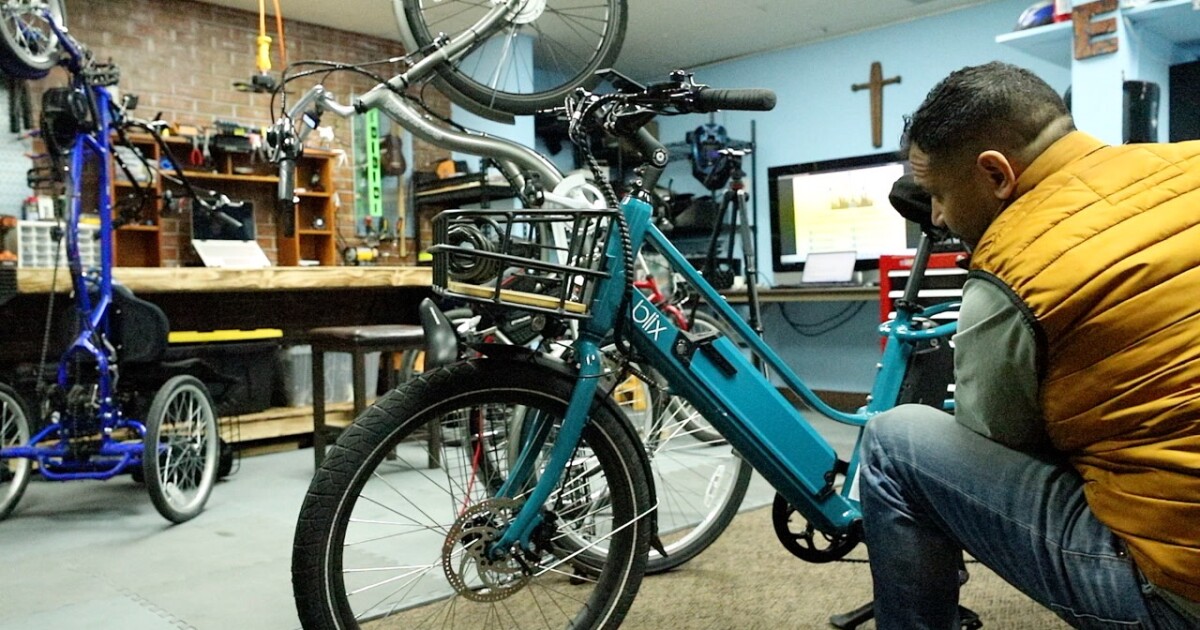 NORTHGLENN, Colo. – A Colorado man is working to change the way we travel by helping people get out of their cars and onto electric bikes.

“Last year alone, 2.6 billion gallons of gasoline were wasted just people sitting at a red light waiting for the light to turn green within five miles of their home,” Gary Lowe said.

Lowe owns the Smart Citiez Group, a Boulder-based technical data analytics company for the traffic and transportation industry. Their goal is to help cities with clean and renewable digital solutions for public safety and environmental sustainability.

But Lowe also enjoys building with electric motors as a hobby. So when his buddy made him bet that he couldn’t build an e-bike for less than $1,000 that would beat a 1,000-watt custom e-bike that costs $8,000, Lowe couldn’t refuse.

“I did it for…just under $400,” Lowe said. “So when the day came and I destroyed him in front of his family and his kids and his friends and all that kind of stuff, he made me promise that I had to share that with others.”

When Lowe shared it on the Nextdoor app, he realized there was a great need, especially for people with special needs.

“I haven’t ridden a bike in over 40 years,” June Mitchell said.

Mitchell has a rare lung condition and mobility issues, so when she connected with Lowe on social media, she had no idea what would be possible.

“He listened to my story and understood what I needed, and he actually built the bike,” Mitchell said. “She’s adorable. She’s a trike, so she has three wheels, and she has a motor.”

When she first got on the electric trike, she said it was “pure bliss” and she looked forward to traveling farther and using her car less.

“I used to cycle constantly when I was a kid. So I didn’t realize how much I missed it. It was really fun to be able to be on a bike and get off the street and to have that freedom.

It was a similar story for Larry Heriford, who bought an electric tricycle from a store in Denver so he could get around more with his friend and his dog.

He soon realized that having a front wheel motor wasn’t best for him as it was difficult to get up his steep driveway. When he met Lowe, Heriford learned that the tricycle could be updated to rear-wheel drive to better suit his needs.

After Lowe updates Heriford and his friend’s trikes, they can now travel farther, allowing him to spend less time in his old 2004 Buick Park Avenue.

Since Lowe began his efforts, he has built more than 60 different types of electric bikes and trikes, and he even brings student apprentices to Northglenn’s Crossroads Community Center to teach them the valuable life skills needed to build with electric motors.

He also created an electric drift tricycle that reached the second round of interviews for the TV show “Shark Tank”. The drift tricycle was originally designed for a boy with cerebral palsy who couldn’t sit on a traditional tricycle, but it turns out it’s great fun for adults too.

“It’s incredibly stable, and thanks to the straps we have there, anyone from 3-foot-tall to 6-foot-6 can sit in the bike and have fun with it,” Lowe said. “In Boulder, Colorado, a lot of dads have turned it into a little biker gang. It’s kind of funny. Dads take it more than sons.”

Overall, Lowe’s goal is simply to continue to inspire people to get out of their cars and into more affordable and sustainable modes of transportation.

“To see this young man or young woman ride a bike that is now going to help reduce carbon emissions in our environment…which actually helps them get back on the road, helps them lose weight, helps them so many different things…it’s amazing,” Lowe said.

“His magic that he’s able to do and his heart and passion has really helped so many people,” Mitchell said. “I’m so grateful because I had this opportunity to be a bit normal again.”

Depending on a customer’s needs, upgrading an old bike to an e-bike costs around $800 to $1,500. Lowe has also created an e-bike kit that lets people take an old bike they already own and turn it into an e-bike themselves using a 10-minute video.

People who buy the e-bikes are also eligible for a 15-30% rebate on their taxes thanks to President Joe Biden’s energy plan, Lowe said.