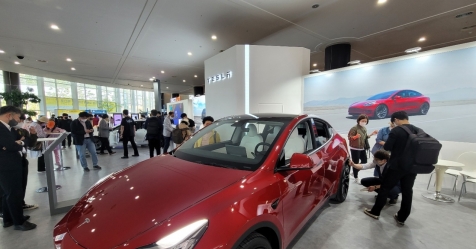 Visitors to the International Electric Vehicle Expo look at Tesla vehicles on display Tuesday at the Jeju Convention Center on Jeju Island. (IEVE)

The International Electric Vehicle Expo, an annual green car exhibition, kicked off its ninth edition on Tuesday, bringing together around 200,000 industry experts and visitors from around 50 countries to South Korea’s Jeju Island.

While the expo preparation committee promised to broaden the participation of finished car brands this year, only two, Tesla and Polestar, took part in this year’s event.

But the president stressed that they must also focus on helping SMEs and startups to help them manufacture their own finished electric vehicles.

“Our goal is not to attract one million visitors to the expo like the Seoul Mobility Show or the Beijing Motor Show. Instead, we want to bring together many thought leaders and provide business opportunities for mobility startups such as Maiv,” Kim said.

Maiv, an automotive startup, has created what it calls the M1 model, a small-sized electric vehicle that can travel 100 kilometers when fully charged.

“It has been three years since we started operations and we have sold around 300 small electric vehicles in the country. But it’s difficult for a startup to make a finished product because we struggle to source auto parts to make an entire car,” said Kim Jong-bae, CEO of Maiv, an electric mobility micro-maker. “In this sense, we need more government support to grow the market for startups and SMEs that want to manufacture electric vehicles.”

This year, South Korean startup Vinssen, which made the country’s first commercialized hydrogen-electric boat, also participated in the expo and exhibited its eco-friendly boat.

“We started an electric boat sharing business for the first time here in Jeju. The business is to rent electric boats to fishermen and also to tourists who have the license to drive boats and want to enjoy the sea,” said Lee Chil-han, CEO of Vinssen.

Global all-electric car makers Tesla and Polestar were the main exhibitors at the expo, where Korean automakers Hyundai and Kia were absent.

Tesla showed off its most popular plug-in electric Model 3 and Y, while Polestar Korea introduced the Polestar 2, its first car to hit Korean roads.

Samsung SDI also participated in the expo to showcase various mobility platforms such as BMW iX, electric off-road vehicle and electric scooters, equipped with its batteries such as Gen.5 and cylindrical batteries.

Starting next year, the expo will showcase not just electric vehicles but everything related to e-mobility, such as electric ships and urban air mobility, organizers said.

“To make Jeju Island a truly carbon-free island, we need to think about how to make carbon-free ships, agricultural machinery and UAMs,” said Kim Dae-hwan, chairman of the Jeju organizing committee. ‘IEVE at a press conference.

“Thus, we will do our best to include these sectors in our show to strengthen its position as an e-mobility show rather than just focusing on electric vehicles from now on.”

The exhibition runs until Friday.

How the UK can cut electricity bills and go green

The safest skin care, the right wine, the perfect plant – all on the road to recovery